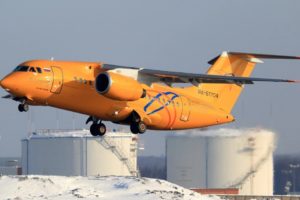 Aircraft An-148 of Saratov Airlines crashed near Moscow in Russia, causing death of the 71 people on board. The airplane disappeared from the radar 10 minutes after taking off from Domodedovo Airport, and a little later it became clear that it crashed in Ramen district on about 40 km from the Russian capital, where debris were found. On board of the aircraft An-148 had 71 people – 65 passengers and 6 crew members. All of them were reported dead.

The airplane was flying to the town of Orsk in the Urals.

According to Russian agencies, eyewitnesses have seen the airplane covered by flames fall in the area of the village of Argunovo, southeast of Moscow. |Fortunately it fell in rural place, without residents living nearby.

The rescue team at the scene of the tragedy is nearly 600 people. However, the work is extremely difficult because of the snow and the bad weather.

The Russian Ministry of Emergency Situations publishes on its site the list of victims of the crash. Three children between the ages of 5 and 12, as well as a 17-year-old boy are among the casualties in the plane crash. Among the passengers there were three foreigners – citizens of Switzerland, Azerbaijan and Kazakhstan.

The investigation looks at several versions of the crash, including human factors, bad weather and technical malfunctions. Other options are also considered.

Investigators also question the collaborators at Domodedovo Airport, from where the plane was prepared for the upcoming flight. The dispatchers at the airport are also being questioned.

The insurance company, AlfaStrahovanie, announced that the passengers and the crew of the crashed aircraft were insured by it. The company has already contacted the airline and is involved in clarifying the circumstances surrounding the crash. 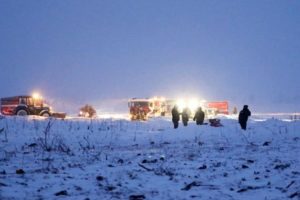 The Moscow Interregional Transport Prosecutor’s Office and the Southern Transportation Prosecution Service have begun an inspection in connection with the plane’s crash. The inspection concerns the operation of dispatchers and the servicing of the crashed machine.

Meanwhile, it was clear that one of the black boxes of aircraft An-148 was found.

Russian President Vladimir Putin expressed condolences to the relatives of the victims. Putin has also ordered a special commission to be set up in connection with the disaster, he added. The Russian authorities do not mention the hypothesis of a terrorist act.

The aircraft An-148 is a regional jet designed and built by Antonov of Ukraine. Until 2017, it was also built by Russia’s Voronezh Aircraft Production Association. Development of the aircraft was started in the 1990s, and its maiden flight took place on 17 December 2004. The aircraft completed its certification programme in February 2007. The An-148 has a maximum range of 2,100–4,400 km and is able to carry 68–85 passengers, depending on the configuration. Since its entry into service, there have been at least five incidents with this type of aircraft. They were connected to the chariots, the electrical system and the control system.