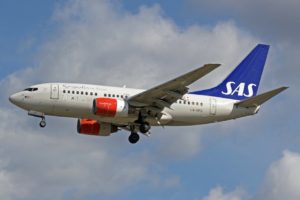 Scandinavian Airlines (SAS) aircraft Boeing 737-683 suffered fire in left engine during a flight from Kiruna to Stockholm, Sweden. Shortly after takeoff the loud bang and flames were observed from the left engine and the pilot diverted to Lulea Airport, turning off the troubled propulsion unit.

Fortunately there were no injured people during the accident. The airplane Boeing 737-683 landed safely at Lulea Airport, following the safety procedure of the airline. All the people were transferred to another flight and successfully arrived in Stockholm.

The aircraft Boeing 737-683 was detained for further inspection and safety check.