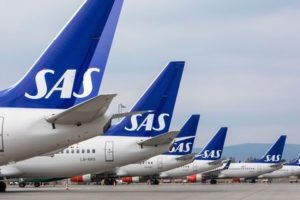 Scandinavian airline SAS has canceled more than 1,200 flights scheduled for Monday and Tuesday due to the pilots’ strike, which has already affected about 170,000 passengers.

On Friday, SAS pilots went on strike after a failed negotiations between the airline the trade union on wages, working conditions and work schedules, which triggered the cancellation of about 70% of the airline’s flights.

Over 1,400 pilots are involved in the strike. It affected most domestic flights, as well as SAS European and Intercontinental flights.

Analysts believe that SAS can not afford to meet wage demands because of the difficult economic environment in which airlines operate.

The negotiations between airline pilot trade unions have been underway since March. SAS advised passengers to check on the airline’s website for details of canceled flights.

The Swedish pilots’ employer said they insisted on a 13% increase in wages, although average wages are already relatively high of 93,000 SEK per month (9,800 USD).

Financial analysts estimate that the strike cost SAS about 60-80 million SEK (6.3-8.41 million USD) per day. If the strike lasts for two weeks, it will absorb the net profit of the airline for the year.

Scandinavian Airlines, usually known as SAS, is the flag carrier of Sweden, Norway and Denmark, which together form part of Scandinavia. The airline operates 169 aircraft to 123 destinations.