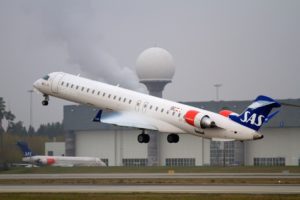 SAS Scandinavian Airlines airplane Bombardier CRJ-900 burst tire on departure of Stockholm airport en route to Brussels, Belgium. The airplane took of from the runway 19R, when the crew was informed for tire debris on the departure track. The crew decided to continue the flight to Brussels, requesting the emergency services to be on stand by for the precautionary landing. Fortunately the SAS Scandinavian Airlines airplane Bombardier CRJ-900 landed safely at runway 25L on Brussels airport two hours after departure. There were no reported injuries and damages to the plane.

The emergency services reported that the inboard left number two tire was blown. Also the post flight inspection revealed damages to the flaps and foreign object ingestion into an engine (CF34), probably caused by the tire bursting.

The local authorities initiated investigation for the accident. The airplane remained on land for further repairs and inspection.

Bombardier CRJ900 is designed to hold 86-90 passengers in a 4-abreast configuration with two lavatories and a galley as standard equipment. It can also be configured with optional 3-abreast business-class seating. Bombardier developed a new larger winglet and improved aerodynamics for the CRJ900 that give it excellent takeoff, climb, cruise and landing performance as well as reducing the fuel burn.

Newer PostTravel Service airplane Airbus A320 veered out of the runway at Bourgas Airport
Older PostBoeing predicts demand of 1,230 new aircraft in Russia in next 20 years