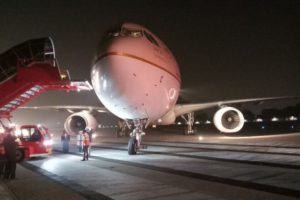 Saudi Arabian Airlines plane Airbus A330-300 suffered damaged of the left nose wheel during maneuvering for departure with 300 people on board. The aircraft was backtracked runway 27 for takeoff at Lucknow airport in India to Riyadh, Saudi Arabia, but the crew abandoned the departure after left nose wheel divorced from the airframe. The emergency services responded and all the passengers were disembarked from the troubled aircraft.

The runway was closed for about 6 hours until the aircraft was towed off. The occurrence aircraft is still on the ground in Lucknow for special safety survey and repairs.

There were no reported injuries during the accident. The local authorities and safety inspectors initiated investigation around the damage.

All the passengers were rebooked for another flights.