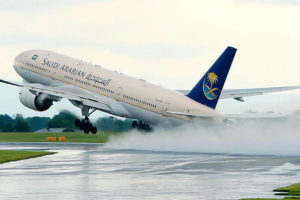 Saudi Airlines allocated seven most modern airplanes and waits for Qatar’s permission to transport pilgrims to Hajj. Earlier, the leadership of the Saudi air carrier reported that it had not yet received permission from the Qatari authorities to land its planes in Doha for the delivery of pilgrims to Jeddah so that they could make a pilgrimage to the holy places for Muslims, despite the request sent a few days ago. Separate Arab media interpret this fact, as Qatar had forbidden Saudi planes to take pilgrims to the kingdom.

However, the authorities of Qatar informed them that the issue of flying permission of Saudi aircraft will be considered earlier this week, since departures of pilgrims from Qatar to Saudi Arabia are scheduled for August 22-25, and their return on September 5.

In turn, the official representative of the Civil Aviation Authority of Qatar reported on Monday that the news that Qatar allegedly banned Saudi aircraft from picking up pilgrims is “groundless”, confirming that they received a request for landing from Saudi Airways, but according to an ordinary procedure, is now under consideration by the Ministry of Islamic Affairs.

Saudi Airways allocated seven newest Boeing 777-300 aircraft to transporting Qatari pilgrims, each of which is capable of accommodating more than 300 people. At the same time, usually no more than 1,600 people come to Saudi Arabia. To date, 250 Qataris have arrived in Mecca, who have reached the place of pilgrimage across the land border with Saudi Arabia.

Last week, the King of Saudi Arabia, as a gesture of goodwill, ordered the opening of a land border for Qataris wishing to perform the Hajj and send the Saudi airplanes behind them, bypassing the Arab blockades imposed by the Arab countries to Qatar in June, which they accuse of supporting terrorism and interfering in the affairs of states Region.