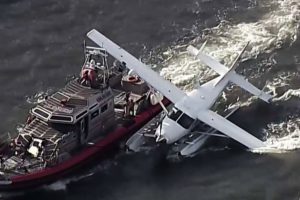 Tailwind Air Service’s seaplane Cessna 208 Caravan emergency landed in the East River in New York City, USA. The aircraft with ten people on board made a takeoff attempts from New York Skyports Seaplane Base, when experienced a collapse of left float struts. The seaplane Cessna 208 Caravan rested with the left hand wing tip in the water. The accident was reported to NYPD and local authorities. At the scene was sent rescue boat, which evacuated all the ten passengers. There were no reported injuries, but damages to the aircraft are sufficient.

All the people on board of the aircraft were wearing life vests and sitting in the plane after it went down in the water. They were evacuated several minutes later.

“Just landing in the east river. No big deal”, said one of the passengers on board of the aircraft, the television producer Bill Lawrence.

The local authorities and aviation safety inspection initiated investigation for the root cause of the accident. The aircraft was towed to the shore, where will be inspected.

Cessna 208 Caravan is an American single-engined turboprop, fixed-tricycle landing gear, short-haul regional airliner and utility aircraft that is built by Cessna. The airplane typically seats nine passengers with a single pilot. The basic 208 airframe can be outfitted with various types of landing gear, allowing it to operate in a wide variety of environments. Some common adaptations include floats with retractable landing gear on the Caravan Amphibian model and skis.