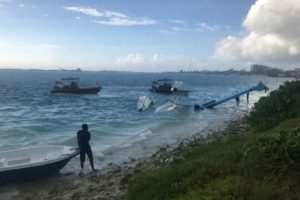 Seaplane de Havilland Canada DHC-6 Twin Otter 300 made hard water landing and flipped over in Maldives near the Male’s Sea Port. The aircraft was performing flight with 15 tourists and 3 crew from Niyama Resort in Dhaalu atoll to Male, but during landing the unexpected extreme weather resulted in losing control by the pilot and the crash. All the people on board were able to evacuate the aircraft in time and there were no reported casualties, as only one crew member received minor injuries and was taken to a hospital. At the scene were sent rescue boats from the local seaport, which assisted the people and secured the area around the plane.

The Civil Aviation Authority of Maldives reported an accident occurred when an aircraft attempted to land at Male’s Water Aerodrome of Velana International Airport. The investigation for the root cause of the accident is under way.