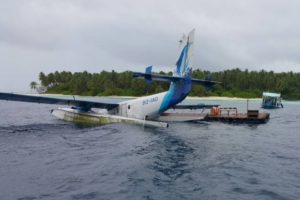 Seaplane DHC-6 Twin Otter collided with object during takeoff from Dh Dhoores Resort in Maldives, breaking one of its floats. Following the collision the aircraft, carrying 12 tourists and 3 crew members, crashed into the water. Fortunately all the people on board escaped from the damaged seaplane unhurt. At the scene arrived rescue and medical teams, which evacuated all the people without serious injuries.

“The seaplane crashed after hitting an object in the sea during takeoff from Dhoores Retreat Resort in Dhaalu atoll”, said the Managing Director of the Island Aviation Service, Abdul Haris. He added that it was the plane’s water rudder that hit the object, damaging it and causing the seaplane to crash.

The tourists on board the seaplane have been taken back to the resort. And that authorities were working on saving the seaplane.