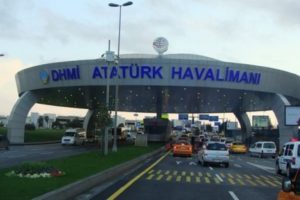 The security officers of the Istanbul’s Ataturk International Airport are checking bomb threats aboard the two planes of the International Airlines of Ukraine (UIA). The work of the airport was stopped during the checks and the flight schedule was affected by the accident.

The aircraft were sent to the airport parking lot for inspection. The passengers were evacuated and the inspection of the airplanes was held. No bomb were found on board, according to the official statement, but the police and intelligence services were informed about possible bomb threats on board of the both flights.

All flights to Ataturk Airport have already resumed after the security check.

Istanbul Ataturk Airport is the main international airport serving Istanbul, and the biggest airport in Turkey by total number of passengers, destinations served and aircraft movements. Opened in 1924 in Yesilkoy, on the European side of the city, it is located 24 km (15 mi) west of the city centre and serves as the main hub for Turkish Airlines.