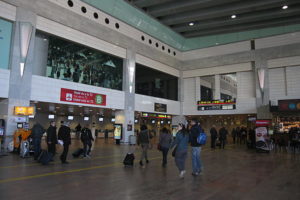 The security staff of Barcelona airport decided to stop the strike in connection with the terrorist attack in the city. The trade union had emergency meeting, as result of which employees of the private company Eulen, which is engaged in the protection of the Barcelona airport, decided to suspend the strike, which lasted several days, and also postponed the protest in Barcelona. The strikers demanded an increase in staff at the airport.

Against the terrorist attacks in Barcelona, ​​the police guard of Barcelona airport is strengthened. A number of airlines, in particular Luxembourg’s Luxair Airlines, warn customers about the increased time for inspection and control at the airport before departure.

During the deadly terrorist attack in Barcelona killed at least 13 people and hundreds were wounded. A van drove down Barcelona’s iconic Las Ramblas promenade. More than a hundred people from at least 24 nationalities were hurt and the death toll could rise.

Meanwhile, Barcelona International Airport has created two special zones for the reception of relative of the victims of the terrorist attacks. In the airpor was also established information bureau to help tourists who wish to fly earlier from the country. Bodies of 13 victims of the terrorist attack in Barcelona have already been taken to the Institute of Forensic Medicine, awaiting the arrival of family members of the deceased.