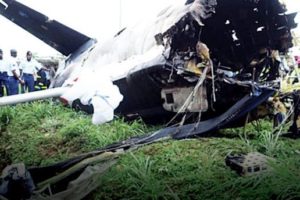 Passenger aircraft Embraer EMB-120ER, operated by Angola’s airline Guicango, crashed near Cuilo shortly after takeoff from Dundo Airport. The airplane was making a domestic flight from Dundo to Luanda in Angola with 3 crew and 4 passengers on board, but several minutes after takeoff the pilot reported malfunction in the engine, which was followed by fire. The connection with the aircraft disappeared and the Guicango’s Embraer EMB-120ER crashed near Cuilo on 200 km from Dundo. All the seven people on board died during the accident.

The local authorities were informed about the missing of the aircraft Embraer EMB-120ER, but several hours were searching for the wreck, as the exact location of the crash was undefined. The wreck was found in a field close to city Cuilo, but unfortunately there were no survivors inside.

The local authorities reported that the victims are six Angolans and one South African nationalities. However, the Portuguese Government, through an official source, has already confirmed that one of these seven occupants is a Portuguese citizen.

“There is information that the wreckage of the aircraft was found by a hunter in Cuilo on 200 kilometers from Dundo”, explained director of the Office of Prevention and Investigation of Aeronautical Accidents at Ministry of Transport. “Air Guicango, which operated the aircraft, is certified company for non-scheduled commercial operations”, added he. “A malfunction in the engine, followed by fire. Adverse weather conditions have also been reported”, explained the investigator.

The investigation, which should find the exact circumstances, is under way.