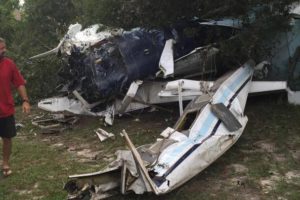 Seven people died in Cessna U206 airplane crash in Mexican state of Sinaloa. The light aircraft with pilot and six passengers took off from Tamazula in the neighboring state of Durango and was headed to Culiacan, but crashed on 17 miles from Culiacan Airport. The circumstances around the accident are unknown, but local authorities confirmed that there were no survivors from the airplane crash.

The wreckage was spotted by another plane and at the scene were send police officers and prosecutors. The investigation for the root cause of the accident is under way.

The area of the crash is difficult to access, which additionally disturb the investigation and collecting of evidences for the accident.

Cessna U206 is a family of single-engined, general aviation aircraft with fixed landing gear, used in commercial air service and also for personal use. The family was originally developed from the popular retractable-gear produced by Cessna. The six-seat Model 206 was introduced as a 1964 model and was built until 1986, when Cessna halted production of its single-engined product line. It was then re-introduced in 1998 and remains in production in 2013.