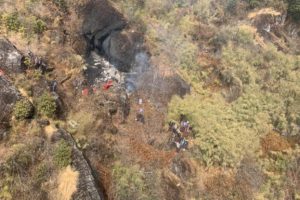 Air Dynasty helicopter Eurocopter AS 350B3e carrying Nepali Minister for Culture, Tourism and Civil Aviation, Rabindra Adhikari, the owner of Yeti Airlines and the Deputy Director-General of Civil Aviation Authority of Nepal crashed into a hillside near Pathibhara in Taplejung district. The accident happened shortly after takeoff from Pathibhara Devi temple en route to Taplejung Airport. The Eurocopter AS 350B3e carried seven passengers at the time of the incident, all reported dead.

The tourism minister along with other officials had planned to visit Pathibhara Temple and then fly to Panchthar to observe the under-construction airport at Chuhan Danda.

Although the reason behind the crash remains unclear, initial reports show that the pilot had entered a cloud and lost control of the chopper before crashing into a cliff.

“It burst into flames a minute after it took off from Pathibhara Devi temple”, said Pratap Babu Tiwari, spokesperson for the Tribhuvan International Airport.