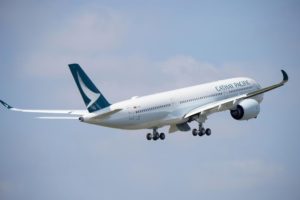 Seven people were injured by severe turbulence on Cathay Pacific aircraft Airbus A350 during a flight from Hong Kong to Brisbane, Australia. The accident happened on 50 miles south of Manila (Philippines) about one hour after takeoff. The crew was serving meals for the passengers, when the aircraft encountered severe turbulence. The pilot climbed to higher level to escape from the unfavorable area and to assess the damages received.

It was estimated that six flight attendants and one passenger were injured. The crew diverted the aircraft to Manila, where landed safely several minutes later. The injured people were disembarked and taken to the hospital for medical treatment. Cathay Pacific’s aircraft Airbus A350 remained on the ground for three hours and then resumed the flight to Brisbane, where arrived with delay of 4 hours.

Passengers from the plane reported the flight attendants impacted the cabin ceiling and came down again during the turbulence. This overall lasted up to 10 minutes, but caused injuries to non=secured people.

The aircraft did not receives any damages during the accident. It was inspected before resuming the flight to Australia.

The local authorities and airline initiated investigation for the accident.

Airbus A350 is long-range, twin-engine wide-body jet airliner developed by European aircraft manufacturer Airbus. The A350 is the first Airbus aircraft with both fuselage and wing structures made primarily of carbon-fibre-reinforced polymer.Its variants seat 280 to 366 passengers in typical three-class seating layouts.