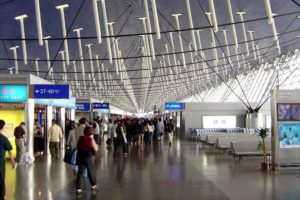 Chinese airlines in the two Shanghai airports Hongqiao and Pudong started using QR codes instead of traditional boarding passes when checking in for a flight and passing a security check. Departing only with hand luggage, passengers can now go directly to the security check before boarding without having to print out boarding passes, having an identity document with them, as well as a special QR code on the mobile phone provided by the airline. The new system allows to significantly speed up the registration process for the flight.

The service is already available for passengers on domestic flights of Air China, China Eastern, Shanghai Airlines, China Southern, Shandong Airlines, Spring Airlines and Jungiao Airlines. Travelers with luggage or with children passengers, however, still have to register at the airline counter.

The administration of the airports in Shanghai together with the company Tensent is also developing a system that will allow passengers to receive up-to-date information on flights, register and buy insurance in case of flight delays via the popular WeChat messenger in China – Hang up.

Shanghai is one of the largest transport hubs in the world with a total annual passenger flow of over 100 million people in two local airports. According to the total volume of passenger traffic, the airport of Shanghai are now inferior only to airports in London, New York, Tokyo and Atlanta.

Currently, two new terminals are being constructed at Pudong Airport, which will be connected to the two underground terminals that are currently operating underground. The project will be completed by 2019. By 2020, two city airports will be able to serve about 120 million passengers and handle over 5.2 million tons of cargo annually.