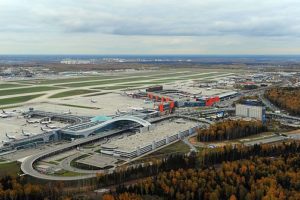 The most popular foreign destinations in January-May 2017 were Paris, Prague, Tel Aviv, Shanghai and Beijing, f
while the domestic destination were St Petersburg, Sochi, Yekaterinburg, Simferopol and Krasnodar. The main increase in passenger traffic in January-May 2017 was provided by airlines Aeroflot, Nordwind, Royal Flight, Ikar, Air France and Air Astana, according to the report of the airport authorities.

In addition, according to the Airport industry connectivity report for 2017, prepared by Airports Council International, Sheremetyevo entered the top 20 of the most progressive hubs in the world (17th in the world ranking of the development of the route network). This indicator is determined on the basis of the analysis of the number of routes, the frequency of air operations, the quality of the connections provided. The growth index of the Sheremetyevo route network has increased by 291% over the past 10 years. According to the availability and development of the route network, Sheremetyevo Airport has risen from the 14th position to the seventh place in Europe for the year. Since the beginning of 2017 the transfer through the Sheremetyevo airport amounted to 2,704,990 passengers, which is 11% more than for the same period in 2016.

Following the results of May 2017, Sheremetyevo airport took the first place in Europe on the punctuality of flights in the category of Major Airports. The airport provided timely service to 91.2% of flights.