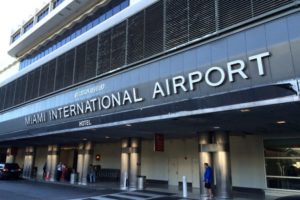 The shootout occurred at the Miami International Airport, after policemen tried to neutralize a man with a knife. As a result, the suspect was injured and arrested. The severity of the injury of the man was not reported. The airport administration announced that the situation is under control. Nevertheless, one of the terminals at the Miami Airport, which is servicing international flights, was closed.

“The unidentified suspect entered a restricted area on the tarmac, where the airplanes actually come in”, said the Miami Police Director, Juan Perez. “One of the sergeants that responded observed a gentleman on the tarmac. The gentleman fled into a room allegedly armed with a knife”, added he. Perez said the suspect was taken to a hospital in stable condition to be treated for his injuries. It’s not clear how he was able to breach security and get onto the runway.

The investigation for the accident is under way.

Because of the incident, a lot of people missed their flights and scheduled departures being delayed. Some people were not able to leave Florida before being hit by the destructive hurricane Irma.

Meanwhile, the Miami Airport director, told that it will be extremely difficult to fly in or out of Miami after Friday if the worst Irma projections occur, although the airport is technically remaining open. It will only close if severe damage or safety concerns from Hurricane Irma result in stranded passengers and non-essential airport employees being evacuated to nearby shelters after the storm.