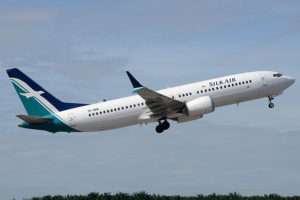 The Singapore airline SilkAir refused to transfer 14 Boeing 737-800 aircraft to the largest local budget carrier Scoot due to the suspension of the Boeing 737 MAX operation.

“In connection with the temporary rejection of the Boeing 737 MAX, several SilkAir flights have already been canceled. Therefore, the transaction has been frozen”, said the airline. The transfer of the first aircraft was to begin in May, an agreement on which was reached in November 2018. Scoot was planning to launch new flights to Laos cities soon.

SilkAir and Scoot are wholly-owned subsidiaries of Singapore Airlines.

Singapore’s authorities were the first to completely close their airspace for Boeing 737 MAX after the crash in Ethiopia.

SilkAir is a full-service regional airline with its head office in Airline House in Singapore. It is a wholly owned subsidiary of Singapore Airlines and operates scheduled passenger services from Singapore to 52 cities in 16 countries in Southeast Asia, the Indian Subcontinent, China, Japan, and Australia.