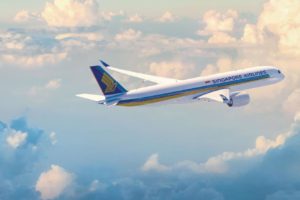 Singapore Airlines completed the longest passenger flight in the world. Airbus A350 departed from Singapore at 18:37 GMT on Thursday and landed in New York at 13:00 GMT. The distance traveled is 16,700 km. The flight lasted for 18 hours and 45 minutes and was without intermediate landings. From October 18th, this is a regular service that will be served three times a week.

The record of the longest passenger flight from Perth to London lasts 17 hours and 20 minutes.

Singapore Airlines (SIA) has re-launched the service for the first time in five years after it was abandoned due to rising fuel prices.

The trip was scheduled to take almost 19 hours, but the aircraft landed with almost had hour in advance.

Travelers dined on beef hor fun and lobster dumplings, guzzled bottle after bottle of champagne, and were catered to by 13 cabin crew, who each took a four-hour nap in bunk beds up in the roof space. A selection of 1,000 movies helped to while the hours away. Less successful was in-flight internet access, available for an additional fee.

The Airbus A350 XWB is a family of long-range, twin-engine wide-body jet airliners developed by European aerospace manufacturer Airbus. The A350 is the first Airbus aircraft with both fuselage and wing structures made primarily of carbon fibre reinforced polymer.