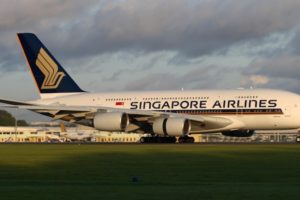 Singapore Airlines and Moscow’s Domodedovo Airport mark the anniversary of the opening of flights on the Singapore-Moscow-Stockholm route. Over the past year, the company has served more than 33,000 passengers in this direction.

“We are pleased to note this important milestone together with the Domodedovo airport. Our flights to Stockholm, the capital of Sweden, which are serviced by the newest A350-900 airliners, equipped with innovative salons, have made it possible to improve air communication with Scandinavia. We want to thank the passengers and partners of the airline for their loyalty and support in the past year”, said Singapore Airlines.

The airline operates 5 flights to Stockholm every week. During the flight, passengers can enjoy the benefits of the latest generation of salons on the boards of modern A350-900 airliners, including upgraded seats in the Business Class and in the Economy and Economy classes, as well as the award-winning on-board entertainment system KrisWorld.

Moscow’s Domodedovo Airport and Singapore Airlines have been cooperating for more than 12 years. Since the beginning of the joint work, the airport has served more than 11,000 flights of the airline and about 1.6 million passengers.