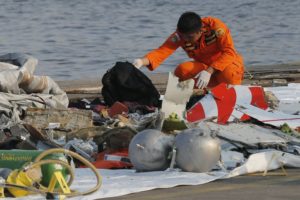 Rescuers from Singapore arrived in Jakarta to assist in the search for flight recorders of the Lion Air’s Boeing 737, which crashed near Java Island.

“Specialists delivered super-sensitive equipment for underwater searches for black boxes”, said the official s from Indonesian National Search and Rescue Agency. They also noted that, “according to preliminary data, the recorders are located in the plane body”. The head of department said that “the weather in the area is favorable of ​​searches, so the operation continues all night”. However, he added, that in the dark, divers have suspended work, underwater searches are carried out using special devices.

The rescuers found the bodies of 10 people, including an infant

“Divers found the bodies of 10 dead, including a baby. In addition, another 14 bags with fragments of bodies on board were taken ashore”, said Muhammad Syaugi from the National Search and Rescue Agency.

The police will soon start the process of matching DNA samples that were previously taken from the relatives of the victims.

Boeing 737 of the low-cost airline Lion Air, operating a flight JT610 from Jakarta to Pangkal Pinang (the capital of the province of Bangka-Belitung), crashed 13 minutes after takeoff into the Java Sea. On board of the aircraft were 189 people. No-one was rescued yet.