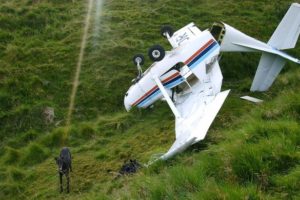 The single-engine light aircraft Cessna crashed on several hundred meters northwest of Hatch Municipal Airport in Dona Ana County in New Mexico, USA. Following the accident, the airplane sustained substantial damage and the four people on board were fatally injured and died. The accident occurred shortly after takeoff. The cause of the crash is unknown and the Federal Aviation Administration arrived at the scene to conduct an investigation of the accident.

The witnesses reported the crash to the local police office and at the scene arrived rescuers, but unfortunately only confirmed the death to all the people on board.

The four occupants have been identified as Anthony Deramus (57), Christopher Howell (33), Kanequa Chancellor (41) and Malcolm Watkins (25).

KTSM has confirmed the three El Pasoans killed in the crash were all members of Destiny Christian Church in Northeast El Paso. Chancellor served as College Youth Pastor and Deramus was a Deacon at the church. Chancellor was also a former UTEP women’s basketball player in the late 90’s.