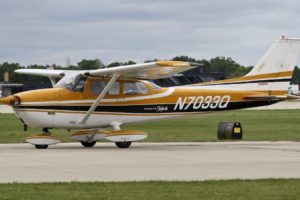 Single-engine plane Cessna 172L Skyhawk crashed near the Placerville Airport, causing injuries to both people on board. The pilot and a passenger left the plane after the crash and were taken to a hospital as a precaution.

The Cessna 172 crashed under unknown circumstances right after takeoff from Placerville Airport. The accident happened on 3 miles from the airport’s runway. The aircraft suffered significant damages, but there was no fire or explosion after the crash.

The root cause of the crash is unclear, but according to preliminary information, it happened due to technical malfunction of the single-engine plane. The FAA and the National Transportation and Safety Board are investigating the case.

The Cessna 172 Skyhawk is an American four-seat, single-engine, high wing, fixed-wing aircraft made by the Cessna Aircraft Company. The fuselage of the plane is all-metal with semi-monocoque structure, while the power plant is one 150 hp Lycoming O-320-E2D 4-cylinder horizontally-opposed air-cooled engine, driving a two-blade fixed-pitch metal propeller.