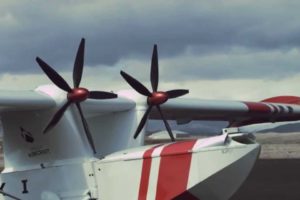 The Spanish company Singular Aircraft has started serial production of new heavy unmanned aerial vehicles Flyox Mark I and Mark II. Already in September this year the first aircraft will be received by the American company Unmanned Aircraft International, which will take their tests and certification for use by private companies. Currently, private companies in the US do not use heavy drones. According to the current rules of the US Federal Aviation Administration, private companies are allowed to operate only devices not heavier than 25 kilograms. At the same time the regulator is already considering the possibility of certification of heavy drones for civilian use.

The length of the Spanish Flyox drones, capable of taking off and landing on the water, is 11.50 m, the wing span is 14.00 m, and the height is 3.60 m. The maximum takeoff weight of the device is 3.8 tons. UAV can reach speeds of up to 233 km/h. In the basic version, the flight duration of the device is about seven hours.

Unmanned Aircraft International intends to certify Flyox for use in various rescue operations and for extinguishing fires. The Mark II version is capable of collecting water from the reservoir in planing mode and dropping it to the fire. The device can take on board about 2,000 liters of water.

The Flyox Mark I can be equipped with a fuel tank of increased volume and an electron-optical sensor weighing up to 227 kilograms. In this configuration the UAV is able to stay in the air for up to 50 hours. The American company plans to use new Spanish devices in Pendleton in Oregon, as well as in the Canadian Alma in Quebec and Formost in Alberta.

In November last year, the US company Lockheed Martin and its Sikorsky unit tested an “unmanned team” consisting of a SARA (civil S-76) unmanned helicopter, K-Max unmanned synchronizer, Indago quadrocopter and Desert Hawk 3.1 drone. These apparatuses were used in extinguishing a fire.

During the tests, the Indago quadrotermost independently detected a fire and transmitted its coordinates to K-Max. It, in turn, took off, drew water in a special container and dropped it on the fire. At the same time, the Desert Hawk 3.1 drone by the operator flew around the area and found a lost person who was escaping from a fire.

Then Desert Hawk 3.1 gave the coordinates of the person nearest to him the drone – K-Max, and he sent them to the unmanned SARA helicopter. After that, SARA flew to the lost, took it on board and brought it to the airport. The entire operation was carried out with minimal participation of operators, who only monitored the actions of robots.