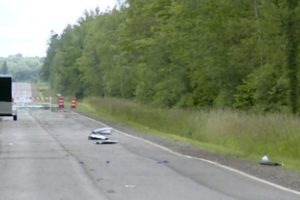 Six people died after aircraft Cessna 421 crash in Wisconsin, USA. The airplane took-off from Chicago en route to Canada and crashed into a rural Wisconsin forest. According to the officials and investigation, the aircraft Cessna 421 began to lose altitude, after which the communication with pilot disappeared. The local authorities initiated investigation and search and rescue operation for the missing people, but later the wreckage of the airplane were found in Price County, together with bodies of the six people on board.

“They found a debris of the Cessna 421 crash at the field right there on the state highway”, said the Price County Sheriff’s Department officer, Lt. Gabe Lind. “They quickly sent out a request for assistance, because it was clear the debris was strewn over a large area, including into thick woods and swamp”, added he. “Once the fuselage was located, it was clear there were no survivors. There were six adults in the fuselage, but authorities would not disclose the genders of the deceased and their names were not immediately available”, added the Price County Sheriff’s Department officer.

National Transportation Safety Board investigators said there was a discussion between the pilot of the plane and air traffic controllers about local weather phenomenon, but further details weren’t released.

Cessna 421 Golden Eagle is an American six or seven seat twin-engined light transport aircraft, developed in the 1960s. The airplane is an all-metal low-wing cabin monoplane with a retractable tricycle landing gear and powered by two geared Continental GTSIO-520-D engines, wing-mounted in tractor configuration. The cabin is accessed from a door, on the left hand side behind the wing.