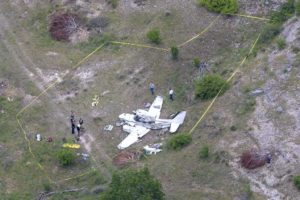 Six people are killed after a small twin-engine plane Beechcraft 58 Baron crashed in a ravine on 6 miles off Kerrville Municipal Airport in Texas. The aircraft was approaching the runway at Kerrville after a flight from West Houston Airport when suffered technical problem and lost attitude. The plane crashed, killing all the occupants on board.

A witness of the accident, Richard Hall, commented that saw the aircraft falling in the ravine just before reaching Kerrville Municipal Airport.

“Mainly it was just fuselage. The wings were collapsed. The fuselage was only about this high now. It was a good sized plane but went I saw, it looked like it was a really small plane”, said the witness Richard Hall.

The rescue teams arrived at the scene of the crash, but only found the dead bodies of the occupants on board.

The investigation for the root cause of the crash is underway.

The Beechcraft Baron is a light, twin-engined piston aircraft designed and produced by Beechcraft, introduced in 1961. Introduced for the model year 1969, the larger, more powerful Baron 58 was developed from the Baron 55, introducing club seating, double aft baggage doors, and new gross weight of 5,400 lbs. Depending on the variant, the Baron 58 is fitted with either the Continental IO-520 or IO-550 300-hp engine. The Baron 58 can cruise at 200 knots (370 km/h) at 7000 ft (2100 m). The lengthening of the fuselage increased rear baggage space, as well as providing more comfortable six-place seating over the Baron 55 and 56TC.