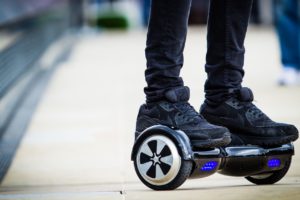 The passengers can rent segways and gyroscooter (hoverboards) in the main airports of Europe, which to speed up the transit between the different gates or even terminals. The service will be provided by the company Skycop and the cost will be 3-5 EUR for the first 30 minutes and 7 EUR per hour. According to the calculations of the company, about 10% of the 900 million passengers traveling annually through European airports will gladly use the service, which saves time during transplantation.

According to the company, the transfer passengers almost run from one landing gate to the other, and sometimes from one terminal to another, to catch the next flight. The new service will target helping such kind of people.

“Passengers travelling with transfer have to change flights at a connecting point, however, airlines arriving late ever so often (22% of all flights in EU) give passengers close to no chance to cover sometimes 5 km reaching distance between the terminals”, says the statement of Skycop.

The hoverboards can be used not only by passengers hurrying for the next flight, but also by those who are bored in anticipation of a late departure.

The company will invest 700,000 EUR in buying 100 hoverboards and 100 segways for this initiative.