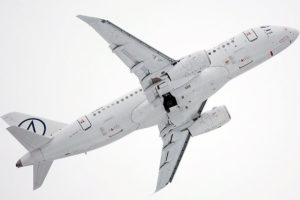 The Slovenia airline ADRIA Airways intent to acquire 15 Sukhoi Superjet 100 (SSJ 100). The deliveries of the aircraft will start from early-2019 on the terms of long-term leasing. An agreement also includes the creation of a joint venture for the maintenance and repair of aircraft at the Ljubljana Airport (Slovenia) for Sukhoi Superjet 100.

President of JSC Sukhoi Civil Aircraft Alexander Rubtsov and the CEO of ADRIA Airways Holger Kowarsch noted that this signing opens a new chapter in the development of relations between the companies.

“We are pleased to partner with Sukhoi Civil Aircraft, a company that fully supports the development strategy of ADRIA Airways. Over the past two years, we have analyzed the operation of the SSJ100 aircraft, as a result of which it was concluded that the dimension and characteristics of this aircraft are ideal for solving the problems of our strategy”, said Holger Kowarsch. He also noted that the operation of the SSJ100 in the ADRIA fleet will make it possible to use most of the existing CRJ and Airbus fleet in charter flights.

“We understand that when entering the European air transportation market, after-sales service for SSJ100 aircraft should be provided on a serious professional level. Jointly with ADRIA Airways, an aircraft maintenance enterprise SSJ100 will be established at the international airport Ljubljana Airport. The technical platform will ensure reliable operation of SSJ100 aircraft in Europe”, said Alexander Rubtsov.