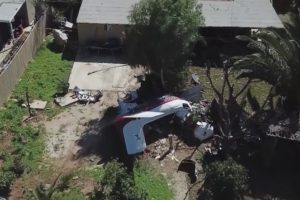 One person was killed after small aircraft Beechcraft D50 Twin Bonanza crashed in a residential area of Riverside County, California. The crash was reported around 11:50 a.m. on Saturday in the 10500 block of Robinson Avenue in the La Sierra neighborhood.

The preliminary investigation determined that the aircraft Beechcraft D50 Twin Bonanza was flying from Chino to Apple Valley, but during flight suffered a technical problem and loss of power. Thus, the pilot sent a distress call and headed to Riverside Municipal Airport but did not reach it, crashing in the residential area.

The airplane was partially consumed by the post-impact fire. The pilot was the only person on board. Fortunately, there were no reported injuries on the ground, as four people were in the house where the plane went down. The plane struck a tree before landing in the yard.

“My son started yelling for me. He heard a plane go down, and when I came outside, I saw it go down and just heard a loud boom”, said a witness Elizabeth Short. “He was going lower and lower and he just nosedived straight down”, adds another witness, Amber Short.

Officials with the FAA and National Transportation Safety Board (NTSB) were investigating the crash.

Beechcraft Model 50 Twin Bonanza is a small twin-engined aircraft designed by Beechcraft as an executive transport for the business market. It was developed to fill a gap in Beechcraft’s product line between the single-engined Model 35 Bonanza and the larger Model 18. The Twin Bonanza is about 50% larger than the Bonanza, has more powerful engines, and is significantly heavier, while in its earliest form having only half the passenger capacity of the Model 18.