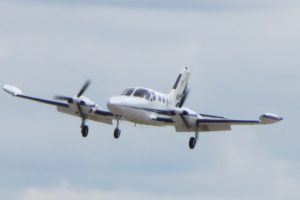 Small aircraft Cessna 421C Golden Eagle crashed in farm field terrain in Union County northeast of Plain City, Ohio. Following the accident, the airplane sustained substantial damage upon impact with the terrain and powerline supports and the sole pilot on board received fatal injuries and died.

Chief Deputy Tom Morgan of the Union County Sheriff’s Office said that the plane skidded across a road and hit a utility pole and lines after crashing Sunday. That caused a power outage in the village of Plain City, northwest of Columbus.

Several roads are closed in the area, including US 42 from Delaware County to US 33. Residents are asked to avoid this area.

The cause of the crash is unknown. The Federal Aviation Administration and the National Transportation Safety Board have been notified. According to preliminary information, the weather may have been a factor to the incident. It was snowing and overcast at the time of the crash.