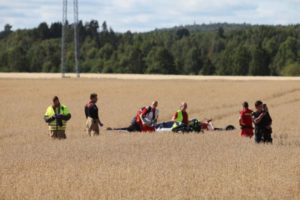 Small aircraft Pitts Special crashed near the Ekeberg school in Holmestrand, Norway, killing the two people on board. The aircraft took off from Torp airport, but several minutes later lost height and crashed on the ground in front of the eyes of many witnesses, including schoolchildren. Fortunately there were no injured people on the ground. The local authorities sent rescue teams at the scene, but both occupants on board were already died.

Holmestrand municipality has established a crisis team at Ekeberg School. The police are urging witnesses to report their evidences. The local authorities confirmed that the aircraft crashed near the school at area where there were no people. The plane must have crashed right next to Ekeberg school, but did not hit the school and there were no students nearby.

Pitts Special is a series of light aerobatic biplanes designed by Curtis Pitts. It has accumulated many competition wins since its first flight in 1944. The Pitts biplanes dominated world aerobatic competition in the 1960s and 1970s and, even today, remain a potent competition aircraft in the lower categories.