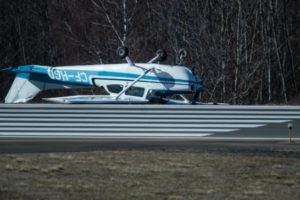 Small airplane Cessna 172M Skyhawk crashed at Bellingham International Airport in Washington, USA. The aircraft was preparing to takeoff onto Runway 34 but flipped on the runway. The two people on board were not injured and left the airplane before the emergency services arrive at the scene. They were checked out by paramedics and transported to the General Aviation terminal.

A wind gust is being blamed for the flipping of the airplane Cessna 172M Skyhawk. The pilot tried turning onto Runway 34 at Bellingham International Airport for takeoff, but the plane was hit by a gust of wind, lifting it and causing it to flip over onto its wings along the left shoulder on the south end of the runway.

According to National Weather Service instruments at the airport, winds were out of the north-northeast at 23 mph and gusting to 33 mph.

Bellingham International Airport was closed until removing of the flipped aircraft.

Cessna 172 Skyhawk is an American four-seat, single-engine, high wing, fixed-wing aircraft. Measured by its longevity and popularity, the Cessna 172 is the most successful aircraft in history. Cessna delivered the first production model in 1956 and as of 2015, the company and its partners had built more than 44,000.