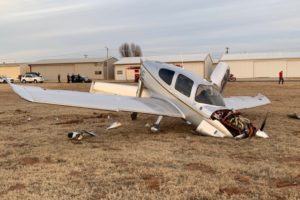 Small airplane Cirrus SR22 crashed at Jones Riverside Airport in south Tulsa on Wednesday afternoon. The aircraft experienced a loss of directional control during landing at the airport. As a result, the aircraft had a subsequent impact with airport terrain, crashing on the taxiway. The sole pilot on board was not injured, but the aircraft sustained substantial damage.

The airport support teams arrived at the scene to assist the pilot. EMSA and Tulsa firefighters also responded. The investigation for the root cause of the accident is underway. According to preliminary information, the plane began wobbling in crosswinds as it was descending toward the runway and crashed on the east side of the east taxiway.

The airport was closed while crews clean up the wreckage, but the operations resumed shortly after that.

Cirrus SR22 is a single-engine four- or five-seat composite aircraft built from 2001 by Cirrus Aircraft of Duluth, Minnesota. It is a development of the Cirrus SR20, with a larger wing, higher fuel capacity, and a more powerful, 310-horsepower (231 kW) engine.