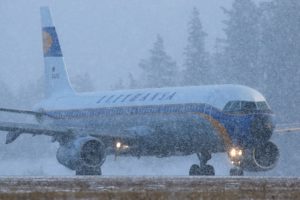 Snow and bad weather caused closed the Swedish Stockholm airport and led to delay or cancellation of dozens of flights. In all, some 30 flight departures have been cancelled from the Arlanda airport so far, and another 30 have been delayed

“Usually our snow clearing opportunities are the best in the world, but this morning there were problems”, said the spokesman for Sweden’s Swedavia airport operator, David Carlsson.

In Kalmar, where the snow resulted in flight delays and cancelled trains earlier in the day, it has now stopped snowing. In the municipality of Morbylanga on the southeastern island of Öland, the storm has prompted authorities to cancel all school transports for Tuesday. The schools will stay open for those who are able to get there.

Stockholm Arlanda Airport is an international airport located in the Sigtuna Municipality of Sweden, near the town of Marsta, 37 km north of Stockholm and nearly 40 km south-east of Uppsala. The airport is located within Stockholm County and the province of Uppland. It is the largest airport in Sweden and the third-largest airport in the Nordic countries. The airport is the major gateway to international air travel for large parts of Sweden. Arlanda Airport was used by close to 27 million passengers in 2017, with 21.2 million international passengers and 5.5 million domestic.