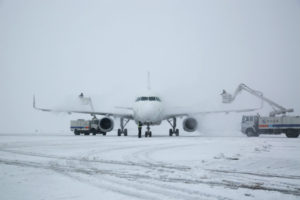 Snowfalls and frosts in the United States continue to hamper air traffic. On Wednesday more than 1,600 flights were canceled, which another 600 were delayed at the airports of the Midwest USA.

The urgent situation continues for the fourth consecutive day.

Due to frost, mail delivery in 11 states of the country has been suspended. In Chicago, the railroad is heated by fires.

Illinois Governor Jay Robert Pritzker on Tuesday warned the state of the state about a natural disaster due to extremely severe and prolonged frosts. He noted that, according to the forecast of the US National Weather Service, air temperature in northern Illinois can reach minus 48.3 degrees, in the central part of the state – minus 37.2 degrees, and in the south – minus 31.6 degrees. The average temperature for the state in January – the coldest month of the year – is minus 4.4 degrees (excluding wind).