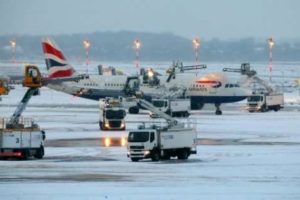 Heavy snow has caused hundreds of flights cancellation in Germany and Netherlands. More than 300 flights were cancelled at Frankfurt airport, while Duesseldorf airport was also forced to close for four hours during the afternoon. The Dutch airport in Eindhoven was temporarily closed as well. The strong winds blocked France and left thousands of people blocked at the airports, without option for returning home.

More flights could be cancelled in the evening, but the weather was forecast to improve in the coming hours, which probably will normalize the situation within coming days.

The airport operators asked passengers to check with their carrier online whether their flight would go ahead before travelling to the airport.

Much of Germany woke up to snowfall and temperatures around zero.

London’s Luton Airport closed its runway for two hours before reopening around 1130 GMT to departing aircraft, according to a spokesman. It had opened to incoming flights by early afternoon. However, Heathrow and Birmingham left thousands of people blocked there in the mess.