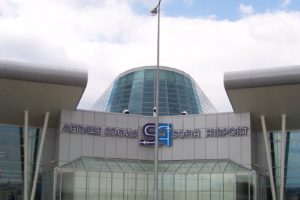 Sofia International Airport was evacuated after bomb threat a day before the official opening of Bulgaria’s EU presidency. The two two terminals of the airport were closed for more than hour today after bomb alert at Border Police. The building were evacuated and all the passengers were taken away during the safety checks. The Internal Affairs officers checked the signals and special safety procedure was executed.

After careful scrutiny, it turned out that the bomb threat was false. An hour later the normal operation of the airport is restored.

The operations returned to normal and at the airport are expected to arrive hundred of official guests, journalists and politics for the official opening of Bulgaria’s EU presidency. The Minister of Internal Affairs ensured that the security and organization of the opening of the European Presidency is under control.

In anticipation of the events behind the European presidency, the local authorities started intensifying checks against unauthorized transport. In the course of the action were found offenders who were waiting for guests at the Sofia International Airport. It turned out that one of the self-employed carriers did not have a driver’s license.

Later, the Minister for the Bulgarian Presidency Lilyana Pavlova showed the electric cars that will transport the delegates arriving in Sofia from the airport to accommodations and events.