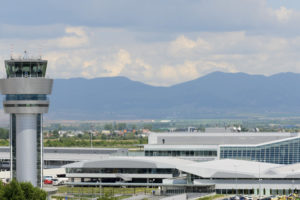 The Sofia-Vienna is the busiest air route from Bulgaria, according to the data from the European Statistical Office Eurostat for 2017. Last year, over 155,000 people were transported from Sofia Airport to Schwechat Airport in Vienna, with a total of 1,646 flights. However, both passengers and flights are declining.

The second busiest route is Sofia-London Luton with 140,836 passengers transported and 873 flights. With this destination, both figures are growing.

Third is Sofia-Frankfurt-on-Main with 121,494 passengers and 991 flights, with a decrease in both main indicators.

Fourth in the ranking is the Sofia-Munich route with almost 117,700 people and just over 1,000 flights. The number of passengers is decreasing, but the number of flights is increasing, shows the European statistics.

Fifth is the Sofia-Istanbul Ataturk Airport with just over 90,000 people and 908 flights and an increase of both indicators.

European busiest airport remains Heathrow in London. The most preferred route from there is to John F. Kennedy International Airport in New York. Following are the routes to Dubai, Dublin, Amsterdam and Hong Kong.