The Southern Winds airline was analyzed for the “success” it achieved in the mid-1990s. Its founders, Juan and Cristian Maggio, received recognition and the case was analyzed by how the monopoly that dominated broke for those years the Argentine air market.

First the crisis of 2001 and 2002 and, later, a scandal linked to narcovalijas that arrived in Spain on a flight of the company ended up marking their disappearance. Their planes were abandoned for more than a decade on the side of the runway of Ambrosio Taravella airport.

The first factor that distinguished SW was that, in 1996, when it started operating, it established its hub at the Córdoba airport , from where it flew to several of the main Argentine cities without passing through Buenos Aires. The model was recently retaken in the last two years with low-cost companies.

Another innovative concept was that he used regional jets (he started with four Canadair with 50 seats). Three years after its start, it added another dozen routes and had about 1500 employees.

At that same time -1999- he created his SW Cargo division and in 2001 he began to cover international routes (Madrid and New York, Los Angeles, Mexico, Miami and Santiago de Chile) for which he incorporated two Boeing 767 / 300ER; It was the fastest growing company in the aerospace industry.

After the attack on the Twin Towers in New York – which led to the rise of insurance – and the devaluation of Argentina, the problems for what was the star of the Argentine commercial market began. The company was redesigned, abandoned the lease of the Bombardier and rented three Boeing 737/200 that were based in Aeroparque; They abandoned several routes and there were layoffs. 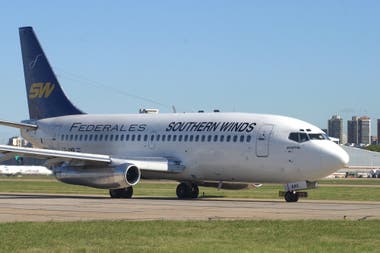 In that context, it emerged as a “solution” – linked to the good relationship that the Maggio had with the then Secretary of Transportation, Ricardo Jaime – the association with the state Lafsa, created in May 2012 and that had 850 employees but no airplanes.

That relationship was formalized in September 2003 and the State paid $ 8 million per month to SW, a figure that covered about 40% of the costs.

The specialists say that more than a society, it was a rescue. Already then Eduardo Eurnekian owned 30% of the company that, with the subsidies, paid the debt he had with AA2000.

On September 17, 2003, with an act at the Pan-American hotel, Southern Winds-Federals was presented. The designated president, Alberto Bidart, assured the fired “partners” that work was being done to incorporate them.

On October 3 the flights began; President Néstor Kirchner spoke at the Aeroparque and said that it was “faced with a tremendously significant event”, highlighting the “will and desire” to defend the sources of work, the “firm conviction” of the authorities to constitute an alternative to have an exploitation of airspace without monopolies and the possibility of “having a line that also bears fruit to all Argentines.”

The “society” began with routes to Bariloche , Buenos Aires, Comodoro Rivadavia, Córdoba, El Calafate , Iguazú, Mendoza, Neuquén , Río Gallegos , Salta and Tucumán and planned to add Jujuy , Mar del Plata , Resistencia and Ushuaia; There was even talk of joining the continent with the Falkland Islands (a route that only in the coming months will Latam). Kirchner used his planes for official flights several times.

In the international market the problems continued: at the beginning of 2004 it operated with a single Boeing 767 for flights to Madrid and charters to Cancun; At that time, the Argentine businessman based in Spain, Martin Varsavsky, had joined as an investor.

The beginning of the end was on September 17, 2004, when four suitcases that had traveled in a SW plane without a passenger appeared at the Madrid airport, which is prohibited.

The letterhead said “Argentine Embassy in Spain” and had been charged with priority in the preferential compartment of the crew, so that they would go down first. When the Civil Guard opened them, it found 58.90 kilos of pure cocaine, equivalent to 1.5 million euros.

In Spain actions were initiated immediately and in Argentina a month later Cristian Maggio denounced – with reserved identity – the fact before the Federal Prosecutor’s Office of Guillermo Marijuán. He said they dispatched the luggage as a frequent “passenger service” Spanish Toimil Batan and González Villar.

When the case was already a scandal, in early 2005, Kirchner cut the contract between Lafsa and SW; the company was presented in a preventive contest on March 16; In October, employees were notified of the transfer to the Plaza group (Claudio and Mario Cirigliano) and on November 25, 2005 it ceased operations.

She owed salaries and was a hotbed of versions about who would be the new partner that would “save her.” SW concessions were canceled in mid-2008.

SW always presented himself as a victim of “narcovalijas“. In 2009, the Criminal Cassation Chamber confirmed the convictions for aggravated smuggling of Walter Beltrame (employee of SW, responsible for controls in Ezeiza) and of the passengers González Villar and Toimil Batán. The Maggio were deprocessed.

On the other hand, in 2011 Juan Maggio was sentenced to three and a half years in prison and a $ 90,000 fine by the Federal Oral Court 2 of Córdoba as author of misappropriation of taxes (for withholding airport fees).

Only a few months ago the National Civil Aviation Administration arranged to take off the side of the runway of the Cordoba airport the three Boeing 737 that had been abandoned for 14 years.