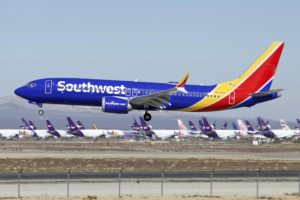 Southwest Airlines plane Boeing 737 Max 8, performing ferry flight WN8701 to Victorville for storage, made an emergency landing at Orlando International Airport after failure of its right engine. The flight was performed without passengers on board but only the two pilots. The airplane model Boeing 737 Max is currency grounded by the FAA and all flight with passengers are forbidden.

The pilots were flying the jet to California when an engine overheated shortly after takeoff. They followed the safety procedure and turned around, landing safely at Orlando International Airport a few minutes later.

“The pilots reported a performance issue with one of the engines shortly after takeoff”, says the statement of the airline. “The crew followed protocol and safely landed back at the airport”, adds the statement.

During the incident, there were no reported injuries or damages to the plane. It is not clear if Tuesday’s emergency landing was related to suspected problems with the aircraft. An investigation into the crashes focuses on an automated anti-stall system and not engine problems.

Southwest has 34 of Boeing’s 737 Max jets. Its pilots were among those from three American carriers who tested recent software changes intended to decrease the chances of triggering the Maneuvering Characteristics Augmentation System, or MCAS.

Boeing 737 MAX is a narrow-body aircraft series designed and produced by Boeing Commercial Airplanes as the fourth generation of the Boeing 737, succeeding the Boeing 737 Next Generation (NG).