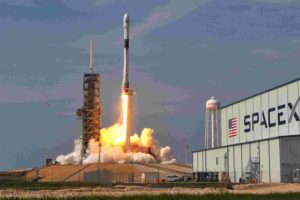 The SpaceX company once again postponed the launch of the Falcon 9 missile, carrying the first of a series of third generation GPS navigation satellites of the US Air Force.

“Standing down from today’s launch attempt of GPS III SV01 to further evaluate out of family reading on first stage sensors; will confirm a new launch date once complete”, says the official statement of SpaceX.

Originally it was planned to launch the rocket on Tuesday, but it had to be postponed for a day due to the problems that, as the company pointed out, “arose on Earth”.

According to the designers of the new satellites, they will not only be more robust but also provide enhanced positioning accuracy. For civilian GPS receivers, the error will be approximately 1-3 m with good visibility (currently 3–10 m), for the military even less.

The United States intends to withdraw a total of 32 GPS III vehicles: the first ten – in 2018-2023, the rest – in 2026-2034. Each of the first 10 vehicles will cost the Pentagon 577 million USD, according to experts. The rest is expected to spend an aggregate of 7.2 billion USD. According to Air Force Minister Heather Wilson, GPS III is called upon to play an “important role in providing defence for the United States”.