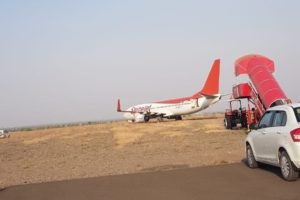 SpiceJet airplane Boeing 737 suffered a runway excursion after landing on runway 09 at Shirdi Airport in India. The aircraft was performing a domestic flight SG946 from Delhi-Indira Gandhi International Airport to Shirdi Airport, but during landing the plane skidded off the runway. All the passengers on board the flight had a narrow escape as the flight was brought under control in time. The people were transported by buses to the terminal. There were no reported injuries, but according to information, all people on board the plane were trapped for over two-and-a-half hours.

Operations at the airport will be delayed for quite some time due to the minor mishap.

A full-fledged investigation will be conducted by the Aircraft Accident Investigation Bureau.

Boeing 737 Next Generation, commonly abbreviated as 737NG, is the −600/-700/-800/-900 series of the Boeing 737 airliner. It is the third generation derivative of the 737. They are short- to medium-range, narrow-body jet airliners powered by two engines. Produced since 1996 by Boeing Commercial Airplanes, the 737NG series includes four variants and can seat between 110 and 210 passengers.