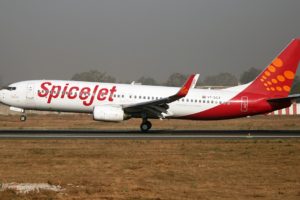 The SpiceJet’s airplane Boeing 737-800 suffered hydraulic failure after take off from Chennai Airport in India. The aircraft was en route to Delhi, but shortly after takeoff encountered issue with the hydraulic system and crew asked to return to Chennai. Meanwhile, all takeoffs were halted and approaching aircraft were instructed to enter a holding pattern. SpiceJet’s airplane Boeing 737-800 made returned and landed on runway 25 less than an hour later. The aircraft suffered a tire burst on the right-hand main landing gear, but succeeded to stop on the taxiway. All the people were disembarked and transported to the terminal with bus.

The runway was subsequently temporarily closed, but after clearing the aircraft, the traffic was released.

Fortunately during the accident there were no injured people from the aircraft and on land. The investigation for the root cause of the accident is under way.