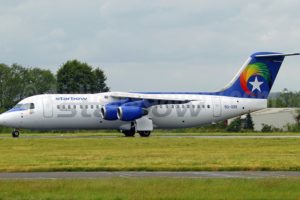 Starbow Airlines ATR-72-212A veered off the runway during takeoff at Accra airport in Ghana. The aircraft, carrying 63 passengers and 5 crew, was accelerating for takeoff from Accra’s runway 21, when veered left off the runway and entangled with the perimeter fence. The aircraft suffered sufficient damages during the accident, while five passengers were slightly injured and taken to the hospital for medical treatment. Among the injured passenger was also Ghana’s Deputy Minister of Energy, who was on board of the aircraft.

The Ghana’s Civil Aviation Authority initiated investigation for the root cause of the accident. They estimated that during accelerating for takeoff from Accra the captain’s seat moved fully backwards violently. As the captain was still controlling nose wheel steering via the steering tiller, this caused the aircraft to veer left and off the runway.

The captain regained control of the aircraft close to the perimeter fence following efforts by the first officer to retard the power levers. Fortunately there were no significant injuries among the crew and people on board.

Starbow Airlines plane ATR-72-212A remains on ground for repairs of the damages received during the accident. It will be inspected by Ghana’s Civil Aviation Authority before released to fly again.