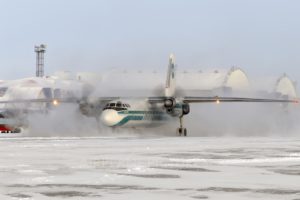 In order to create transport accessibility of the Arctic and northern regions on Russian Federation, the local states will subsidize passenger air transport. The subsidies will be provided for flights of the Arctic zone to the hub at Yakuts airport and in the opposite direction. From April 1 to October 31 the transportation is carried out at special rates on 14 routes, informed the Chairman of the State Committee of the Republic of Sakha (Yakutia) for Arctic Affairs Prokopiy Nikolaev.

The quota of subsidized places is 8-10 in one direction of the flight. The discount on special tariffs is 50% of economically justified fares. In 2017, 10,972 passengers will be transported in all directions. In fact, for April-June 2017, 6,328 passengers (57.6% of the plan) were transported in intraregional communication from the settlements of the Arctic zone of the republic to the hub at Yakuts airport and in the opposite direction.

According to the head of the State Committee, this year it is planned to perform 969 flights. In January-June 2017, 357 flights (36.8% of the plan) were carried out along socially significant routes, and 8,516 passengers were transported. In addition, subsidized socially significant transportations by water transport are performed annually. The passenger transportation by water transport in the Arctic and northern regions is carried out along 3 socially important lines and 21 stops. In 2017, 66 flights are scheduled to be completed. During the first half of the year, 12 flights were carried out, including 1 flight (220 passengers carried) along the route Yakutsk-Neyolov (Tiksi). On route Ust-Kuyga-Nizhneyansk were made 8 flights (142 passengers), while at Yakutsk-Zhigansk were carried out 3 flights (298 passengers).

In order to ensure socially significant transport by water transport for the needs of the Sredne Kolyma and Verkhnekolymsky districts, passenger boats were purchased, added also Prokopy Nikolayev.