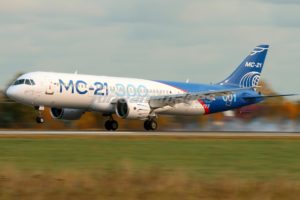 The static testing of the power section of the composite wing for Russian aircraft Irkut MC-21-300 was completed successfully. During the tests on the strength of the load on the power section, the wing panels were brought to the limit, down to the destruction of the structure. As a result, it was experimentally confirmed that the design has an additional margin of safety in relation to design loads. According to the engineers this will ensure the safety of the composite wing when operating the Irkut MC-21-300 aircraft.

Thus, the tests confirmed the correctness of the technical solutions adopted in the design of the composite wing design and the readiness of the Russian aviation science and industry to produce modern competitive aircraft on the world market.

“The conducted researches show that our aviation science and our industry have created an innovative reserve, which for 2-3 years is ahead of existing world technologies in the field of composite aircraft structures. The experience gained in the MC-21 project, I’m sure, will be in demand in the world”, said the Minister of Industry and Trade of the Russian Federation, Denis Manturov.