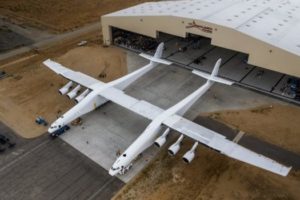 The assembling of Stratolaunch started in December last year. Until now, in the airframe of the aircraft there were some elements, including the leading edges of the wing in the region of the engine pylons. this is acceptable at the stage of preflight tests, especially at the stage of the first prototype. The aircraft with a fully assembled glider during the runs in February this year developed a speed of 40 kts (74 km/h).

A promising aircraft will be used as an air launch platform – from it small rockets will be launched in the air to bring payloads to low Earth orbit.

Each power plant on Stratolaunch has its own control system, as well as its own fuel tanks and a fuel delivery system. This separation makes possible to improve the reliability of the aircraft. The first public demonstration of the new aircraft took place at the end of May 2017.

According to the current plans of Stratolaunch Systems, the first demonstration flight of the new aircraft with launch will take place in 2019. It will launch the Pegasus XL cruise missile, which weighs 23.1 tons. In general, Stratolaunch can provide simultaneous launch of three Pegasus type missiles.

Stratolaunch Systems Corporation was founded in 2011 by Paul Allen. it is a space transportation venture developing a new air launch to orbit system, with its corporate headquarters located in Seattle, Washington.

Video of the tests: