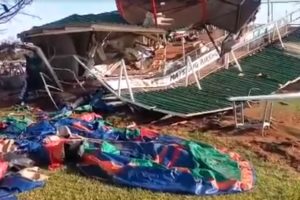 A pilot intentionally stole an aircraft Beechcraft B200 Super King Air and crashed it into a clubhouse at the Matsieng Aerodrome north of Gaborone, Botswana. The aircraft made several low-level flies near the clubhouse, which caused all occupants inside to be evacuated. The final dangerous maneuver resulted in the impact of the aircraft with a Matsieng Flying Club facility at ground level, which caused a collapse of the building and subsequent fire, which engulfed at least a dozen of vehicles on the parking. The pilot died in the aircraft crash, but fortunately, all people on the ground were evacuated earlier and there were no ground injuries.

The emergency services of the Kgatleng District Council were on the scene within minutes to attend to the post-impact fire and distress.

The pilot who killed himself in an alleged emotional suicide run has provisionally been identified as South African pilot Charl Viljoen, who was originally from Olifantshoek in the Northern Cape. He and his wife had reportedly been living and working in Botswana for 10 years.

The local authorities initiated an investigation on the accident.

Beechcraft Super King Air family is part of a line of twin-turboprop aircraft. The plane is driven by Pratt & Whitney PT6A-41 engines with a power of 850 shp (630 kW).