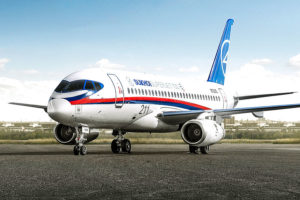 A corresponding trilateral agreement of intent was signed between Sukhoi Civil Aircraft, Kom Airlines and the organization WishV.

The delivery of the six SSJ 100 aircraft will be completed between 2019 to 2020. In accordance with the preliminary agreement, the aircraft will be delivered in a layout of 100 seats and will operate flights both domestically and abroad via the nearest international routes.

Currently, WishV is in the process of being approved as a maintenance and repair station for SSJ-100 type aircraft in Thailand.

The agreement is expected to be translated into a firm contract in the first half of 2019.

The Sukhoi Superjet 100 is a regional jet designed by Sukhoi, a division of the United Aircraft Corporation. Its development started in 2000, it made its maiden flight on 19 May 2008 and its first commercial flight on 21 April 2011 with Armavia.